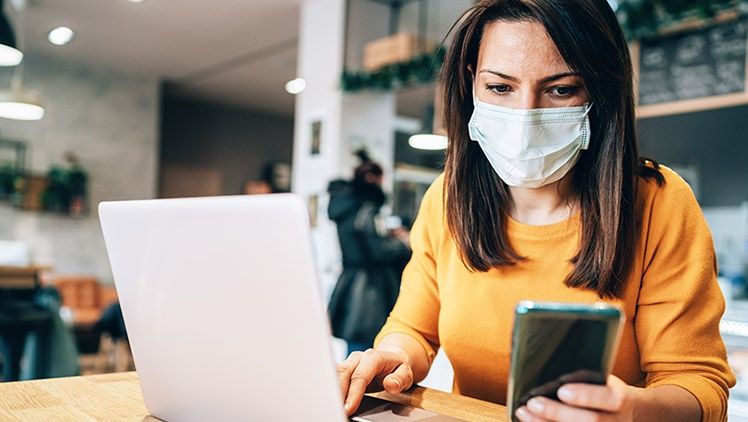 The Great Recession of 2008 and the sovereign debt crisis made it particularly hard for the “2010 generation” – the first victim of the sharp labour market downturn – to join the labour force. According to a number of studies by Céreq[1] in France, only a minority of young people with few if any qualifications at the time managed to finally secure a permanent contract, and even then only after five years. Meanwhile, career prospects darkened for the most highly qualified young people, who found it harder to secure management positions, with more of them taking jobs for which they were overqualified and at lower pay than their particular qualifications had previously commanded. In Europe, it took more than a decade for hysteresis effects to be erased and youth unemployment to return to pre-crisis levels. Even so, young people remain at a significant long-term disadvantage in the labour market, with youth unemployment standing at twice the average rate of unemployment. The challenge of employment for young people is not only about creating new jobs; it also concerns the quality of jobs, with the younger generation overrepresented in the new “platform economy”, synonymous with casual labour and less job security. Young people are also hit particularly hard by social exclusion, with one out of six – rising to one out of four in Italy and Greece – unoccupied, out of work, outside the education system and lacking qualifications (known as NEETs[2]). This form of intergenerational injustice is reflected in poverty figures: the divide between young people and pensioners is deepening, with a higher proportion of young people suffering severe material deprivation than their elders (defined as not meeting four of nine essential criteria, including in particular the ability to pay one’s bills, rent and heating costs, have a high-protein meal every other day, buy a washing machine, etc.).

With the coronavirus crisis, young people are now “disproportionately hit by multiple jolts ranging from disruption in education and training to job losses, not forgetting difficulties finding work”, warns the International Labour Organization[3]. As collateral victims of the pandemic, these young people are liable to suffer another long-term blow to their working lives.

Indeed, being unemployed while young can have serious consequences. Traditionally, a first job enables a young person to put his or her training or qualifications into practice, supplementing them with initial experience of the working world. Without such opportunities, young graduates are liable to lose their skills and encounter increasing difficulties the longer they remain unemployed, perhaps with long-term consequences for their career and earnings potential. For the least qualified young people, not having access to a first job deprives them of opportunities to learn on the job and acquire new skills, and risks alienating them from the labour market for a long time to come, making them vulnerable to long-term social exclusion. Others have no choice but to make a living off poorly paid odd jobs with variable hours; such insecure, vulnerable conditions can easily knock your self-esteem and impact the course of your life.

This mass youth unemployment has consequences that go beyond the economy. It poses a threat to future growth, with devalued human capital translating into lower productivity as skills are eventually lost for lack of use or become ill-suited to a technologically fast-changing world. The capacity to innovate is also weakened in countries with ageing populations, which tend to be conservative and where risk aversion is higher and people tend to save more. And it goes without saying that depressed career prospects tend to translate into lower pay and a loss of purchasing power, with the result that young people are likely to spend less in future. The resulting chronically weak demand, combined with a lower investment requirement, risks plunging economies into anaemic growth for a long time to come. As the number of young people in work and/or earning enough to meet the higher tax bills needed to repay public debt resulting from the crisis declines, this also places a burden on the public purse, with the sustainability of funded pension schemes under pressure and social and healthcare costs increasingly difficult to meet. Lastly, future decisions will be affected, with new households not formed, birth rates in the doldrums and the housing market slowing.

One can only hope that the return to growth will suffice to resolve the problems facing young people. This is a necessary condition but probably not a sufficient one. Europe has a duty to future generations. Access to employment and social inclusion for young people are the very essence of the socioeconomic compromise that binds the generations together. There is thus an urgent need to make the fight against youth unemployment a priority, lest the reluctantly named “generation COVID” become a sacrificed generation.

[2] Not in education, employment or training.

One can only hope that the return to growth will suffice to resolve the problems facing young people. This is a necessary condition but probably not a sufficient one. Europe has a duty to future generations. Access to employment and social inclusion for young people are the very essence of the socioeconomic compromise that binds the generations together. There is thus an urgent need to make the fight against youth unemployment a priority, lest the reluctantly named “generation COVID” become a sacrificed generation.